Thyme (/ˈtaɪm/) is an evergreen herb with culinary, medicinal, and ornamental uses. The most common variety is Thymus vulgaris. Thyme is of the genus Thymus of the mint family (Lamiaceae), and a relative of the oregano genus Origanum.

Ancient Egyptians used thyme for embalming. The ancient Greeks used it in their baths and burnt it as incense in their temples, believing it was a source of courage. The spread of thyme throughout Europe was thought to be due to the Romans, as they used it to purify their rooms and to “give an aromatic flavour to cheese and liqueurs”. In the European Middle Ages, the herb was placed beneath pillows to aid sleep and ward off nightmares. In this period, women also often gave knights and warriors gifts that included thyme leaves, as it was believed to bring courage to the bearer. Thyme was also used as incense and placed on coffins during funerals, as it was supposed to assure passage into the next life.

The name of the genus of fish Thymallus, first given to the grayling (T. thymallus described in the 1758 edition of Systema Naturae by Swedish zoologist Carl Linnaeus) originates from the faint smell of the herb thyme, which emanates from the flesh.

Thymus vulgaris (common thyme, German thyme,  garden thyme  or just thyme) is a species of flowering plant in the mint family Lamiaceae, native to southern Europe from the western Mediterranean to southern Italy. Growing to 15–30 cm (6–12 in) tall by 40 cm (16 in) wide, it is a bushy, woody-based evergreen subshrub with small, highly aromatic, grey-green leaves and clusters of purple or pink flowers in early summer.

It is useful in the garden as groundcover, where it can be short-lived, but is easily propagated from cuttings.  It is also the main source of thyme as an ingredient in cooking and as an herbal medicine. It is slightly spicier than oregano and sweeter than sage.

Initially bought as a small plants in a pot.

Planted in the garden late summer 2016 in Brugge, BE. (Thymus vulgaris.)

In some Levantine countries, and Assyria, the condiment za’atar (Arabic for thyme) contains thyme as a vital ingredient. It is a common component of the bouquet garni, and of herbes de Provence.

Thyme is sold both fresh and dried. While summer-seasonal, fresh greenhouse thyme is often available year round. The fresh form is more flavourful, but also less convenient; storage life is rarely more than a week. However, the fresh form can last many months if carefully frozen.

Fresh thyme is commonly sold in bunches of sprigs. A sprig is a single stem snipped from the plant. It is composed of a woody stem with paired leaf or flower clusters (“leaves”) spaced 1⁄2 to 1 inch (13 to 25 mm) apart. A recipe may measure thyme by the bunch (or fraction thereof), or by the sprig, or by the tablespoon or teaspoon. Dried thyme is widely used in Armenia in tisanes (called urc).

Depending on how it is used in a dish, the whole sprig may be used (e.g., in a bouquet garni), or the leaves removed and the stems discarded. Usually, when a recipe specifies “bunch” or “sprig”, it means the whole form; when it specifies spoons, it means the leaves. It is perfectly acceptable to substitute dried for whole thyme.

Leaves may be removed from stems either by scraping with the back of a knife, or by pulling through the fingers or tines of a fork.

Thyme retains its flavour on drying better than many other herbs.

Oil of thyme, the essential oil of common thyme (Thymus vulgaris), contains 20–54% thymol. Thyme essential oil also contains a range of additional compounds, such as p-cymene, myrcene, borneol, and linalool.  Thymol, an antiseptic, is an active ingredient in various commercially produced mouthwashes such as Listerine. Before the advent of modern antibiotics, oil of thyme was used to medicate bandages. It has also been shown to be effective against various fungi that commonly infect toenails.  Thymol can also be found as the active ingredient in some all-natural, alcohol-free hand sanitizers.

A tisane made by infusing the herb in water can be used for coughs and bronchitis.

For a longer list of species, see Thymus (plant). 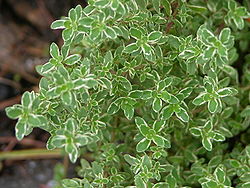 Thyme is best cultivated in a hot, sunny location with well-drained soil. It is generally planted in the spring, and thereafter grows as a perennial. It can be propagated by seed, cuttings, or dividing rooted sections of the plant. It tolerates drought well.  The plants can take deep freezes and are found growing wild on mountain highlands.