Papaver somniferum, commonly known as the opium poppy, or breadseed poppy,  is a species of flowering plant in the family Papaveraceae. It is the species of plant from which opium and poppy seedsare derived and is a valuable ornamental plant, grown in gardens. Its native range is probably the eastern Mediterranean, but is now obscured by ancient introductions and cultivation.

This poppy is grown as an agricultural crop on a large scale, for one of three primary purposes. The first is to produce seeds that are eaten by humans, known commonly as poppy seed (“poppyseed” as an adjective). The second is to produce opium for use mainly by the pharmaceutical industry.  The third is to produce other alkaloids, mainly thebaine and oripavine, that are processed by the pharmaceutical industry into drugs such as codeine and oxycodone. Each of these goals has special breeds that are targeted at one of these businesses, and breeding efforts (including the use of GMO) are continually underway.  A comparatively small amount of Papaver somniferum is also produced commercially for ornamental purposes.

It is increasingly a misnomer to call Papaver somniferum the opium poppy—as many varieties have been bred, and continue to be bred, that do not produce a significant quantity of opium. The variety known as Sujata produces no latex at all.  Breadseed poppy is more accurate as a common name today because all varieties of Papaver somniferum produce edible seeds. This differentiation has strong implications for legal policy surrounding the growing of this plant

When the European Union attempted to ban the cultivation of Papaver somniferum by private individuals on a small scale (such as personal gardens), citizens in EU countries where poppy seed is eaten heavily, such as countries in the Central-Eastern region, strongly resisted the plan, causing the EU to change course. Singapore, UAE, and Saudi Arabia are among nations that ban even having poppy seeds, not just growing the plants for them.  The UAE has a long prison sentence for anyone possessing poppy seeds.

Few pests other than  occasional aphids. 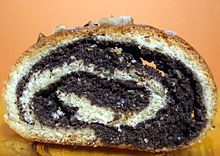 Poppy seeds from Papaver somniferum are an important food item and the source of poppyseed oil, an edible oil that has many uses. The seeds contain very low levels of opiates and the oil extracted from them contains even less.

Poppy seeds are used as a food in many cultures. They may be used whole by bakers to decorate their products or milled and mixed with sugar as a sweet filling. They have a creamy and nut-like flavor, and when used with ground coconut, the seeds provide a unique and flavour-rich curry base. They can be dry roasted and ground to be used in wet curry (curry paste) or dry curry. 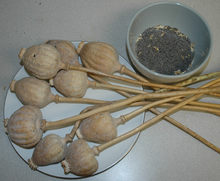 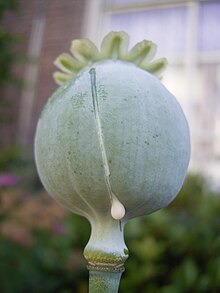 The opium poppy, as its name indicates, is the principal source of opium, the dried latex produced by the seed pods. Opium contains a class of naturally occurring alkaloids known as opiates, that include morphine, thebaine, codeine, papaverine, noscapine and oripavine. The Latin epithet somniferum means “sleep-bringing”, referring to the sedative properties of some of these opiates.

The opiate drugs are extracted from opium. The latex oozes from incisions made on the green seed pods and is collected once dry. Tincture of opium or laudanum, consisting of opium dissolved in alcohol or a mixture of alcohol and water, is one of many unapproved drugs regulated by the U.S. Food and Drug Administration (FDA). Its marketing and distribution persists because its historical use preceded the Federal Food, Drug & Cosmetic Act of 1938.  Tincture of opium B.P., containing 1% w/v of anhydrous morphine, also remains in the British Pharmacopoeia, listed as a Class A substance under the Misuse of Drugs Act 1971.

Morphine is the predominant alkaloid found in the cultivated varieties of opium poppy that are used for opium production.  Other varieties produce minimal opium or none at all, such as the latex-free Sujata type. Non-opium cultivars that are planted for drug production feature a high level of thebaine or orpivine. Those are refined into drugs like oxycodone. Raw opium contains about 8–14% morphine by dry weight, or more in high-yield cultivars. It may be used directly or chemically modified to produce synthetic opioids such as heroin.

Poppies hybridize easily, so if trying to save specific varieties, plant them far apart or cover the flowers with small bags as they open to prevent cross pollination (but you may need to hand pollinate by moving the pollen from the anthers to the stigma with a small brush)

The petals fall off (L) to reveal a fat green capsule (LC) which eventually dries and turns brown as small vents open at the top (RC). The seed inside the capsule turns from white (top R) to brown (bottom R), then black as it matures.

As annuals, poppies are only grown from seed, and self-sow readily. They do best sown directly in the desired location in either early spring or late summer/fall to germinate the following spring. Sprinkle the small gray, black or brown seeds on prepared soil, but do not cover. Mixing the seeds with some sand makes it easier to spread them more evenly over the planting area as you can see where you’ve broadcast them. Seeds should germinate in about a week or two in early spring. They germinate better in cool soil, so seeding later in the spring often is unsuccessful.

They can also be started indoors if necessary, but need to be kept cooler than room temperature to do well. Once the seedlings are about an inch tall, thin the plants to about a foot apart. Remove the smallest plants (pull or cut off the tops), or transplant carefully, trying to disturb the roots as little as possible as they have very sensitive root systems and do not transplant well. Plants growing closer together will be small, weak, and produce fewer and much smaller flowers.

EASIEST TO START OUTDOORS
Plant poppies in late fall or very early spring directly into the garden. In cold climates, seeds will overwinter and germinate when soil thaws. Blossoms and pods are largest when plants grow in cool weather; seedlings are very cold hardy. In a well-worked, finely textured seed bed in full sun, sprinkle seeds as thinly as possible or sow in rows 8 to 10 inches apart. (Mixing dry sand with the seeds will help space them.) Rake in gently or lightly cover seeds 1/8 inch deep, and keep seed bed moist until seedlings emerge in 7 to 14 days. If seedlings come up too thickly, thin poppies early, but delay final thinning to 6 to 8 inches apart until weather has settled in spring.

Flowers will bloom in spring and early summer, then drop their petals and form fat seed capsule pods. When pods get brown and hard, cut and store them in open paper bags. When completely dry, crack pods open to remove seeds. Store harvested poppy seed in the freezer to keep it fresh and pest free.

Please check your feed, the data was entered incorrectly.