The gooseberry scientific names Ribes uva-crispa (and syn. Ribes grossularia), is a species of Ribes (which also includes the currants).

It is native to Europe, northwestern Africa, west, south and southeast Asia.[3]

Although usually placed as a subgenus within Ribes, a few taxonomists treat Grossularia as a separate genus, although hybrids between gooseberry and blackcurrant (e.g., the jostaberry) are possible. The subgenus Grossularia differs somewhat from currants, chiefly in their spiny stems, and in that their flowers grow one to three together on short stems, not in racemes. It is one of several similar species in the subgenus Grossularia; for the other related species (e.g., North American Gooseberry Ribes hirtellum), see the genus page Ribes.

the French for gooseberry is groseille à maquereau translated as ‘mackerel berries’, due to their use in a sauce for mackerel in old French cuisine.

The gooseberry is a straggling bush growing to 1.5 metres (5 feet) in height and width,[8] the branches being thickly set with sharp spines, standing out singly or in diverging tufts of two or three from the bases of the short spurs or lateral leaf shoots. The bell-shaped flowers are produced, singly or in pairs, from the groups of rounded, deeply crenated 3 or 5 lobed leaves. The fruit are berries, smaller in wild gooseberries than the cultivated varieties, but often of good flavour; it is generally hairy, but in one variety, smooth constituting the R. uva-crispa of writers. The colour of the berries is usually green, but there are red (to purple), yellow, and white variants.[8] (Ribes hirtellum fruit can be green or dark purple to black.[9])

June 1,2017 striped plants with some berries.

June 1 2017. Both gooseberry bushes as well as red and white current elicited by Gooseberry sawfly. We pick them of by hand.

Gooseberry bushes are vulnerable to magpie moth (Abraxas grossulariata) caterpillars.[10] In cultivation, the best method for removing them is to remove the larvae by hand soon after they hatch; its eggs are laid on fallen gooseberry leaves.[10]

Other potential threats are V-moth (Macaria wauaria) and Gooseberry sawfly (Nematus ribesii).[10] Nematus ribesii grubs will bury themselves in the ground to pupate; on hatching into adult form, they lay their eggs, which soon hatch into larvae, on the underside of gooseberry leaves. Insecticides used in the 19th-century against these included tar water, weak solutions of carbolic acid, and powdered hellebore, which worked against magpie moths and V-moths as well as gooseberry sawflies. (Foxglove and tobacco infusions were also sometimes used.) A 2008 study concluded that a solution of magnesium sulfate applied to a bush’s leaves has a good residual action on the eggs and larvae of gooseberry sawfly, and also appears to deter egg-laying female sawflies.[13] Careful removal of fallen leaves and tilling of the ground around the plant will also destroy most eggs and chrysalises of these insects.

Like most Ribes, the gooseberry is an alternate host for white pine blister rust, which can cause serious damage to American white pines.[14] Gooseberry cultivation is thus illegal in some areas of the U.S and quarantines are in place to help control this disease. Maine law prohibits the planting and cultivation of currants and gooseberries in most of southern Maine, and prohibits the planting and cultivation of European black currants and their hybrids anywhere within the state. 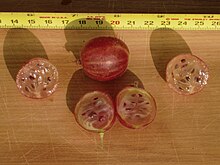 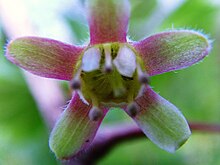 One method of propagating gooseberries is by cuttings rather than raising from seed; cuttings planted in the autumn will take root quickly and can begin to bear fruit within a few years. Those growing from seeds will rapidly produce healthy heavily yielding bushes. Pruning should be carried out to allow light in and give the new growth for next year’s branches an opportunity to grow. Fruit is produced on lateral spurs and on the previous year’s shoots. The main aim is to let the light in and a subsidiary purpose is to allow picking without excessive scratching from the spines.

Heavy nitrogen composting must be avoided as too much nitrogen will produce extensive growth and weaken the bush. This will make the bush susceptible to mildew. The fruit should best be picked off when large to reach maximum sweetness. Supermarkets tend to have theirs picked early and before they are ripe and sweet to give a long shelf life. Heavily laden branches should be cut off complete with berries, this really benefits future crops as it lets the light reach the new growth. Cultivar ‘Invicta’ now is a popular green gooseberry which has some mildew resistance.

In a 100 gram serving, gooseberries provide 44 Calories and are an excellent source of vitamin C (33% of the Daily Value) (table). No other nutrients are in significant content (table). Gooseberries are 88% water, 10% carbohydrates, and less than 1% each of protein and fat (table).