Cucumber (Cucumis sativus) is a widely cultivated plant in the gourd family, Cucurbitaceae. It is a creeping vine that bears cucumiform fruits that are used as vegetables. There are three main varieties of cucumber: slicing, pickling, and seedless. Within these varieties, several cultivars have been created. In North America, the term “wild cucumber” refers to plants in the genera Echinocystis and Marah, but these are not closely related. The cucumber is originally from South Asia, but now grows on most continents.

The cucumber is a creeping vine that roots in the ground and grows up trellises or other supporting frames, wrapping around supports with thin, spiraling tendrils. The plant may also root in a soilless medium and will sprawl along the ground if it does not have supports. The vine has large leaves that form a canopy over the fruits. The fruit of typical cultivars of cucumber is roughly cylindrical, but elongated with tapered ends, and may be as large as 60 centimeters (24 in) long and 10 centimeters (3.9 in) in diameter. Botanically speaking, the cucumber is classified as a pepo, a type of botanical berry with a hard outer rind and no internal divisions. Much like tomato and squash, it is often perceived, prepared and eaten as a vegetable. Cucumber fruits are usually more than 90% water.

A few cultivars of cucumber are parthenocarpic, the blossoms creating seedless fruit without pollination. Pollination for these cultivars degrades the quality. In the United States, these are usually grown in greenhouses, where bees are excluded. In Europe, they are grown outdoors in some regions, and bees are excluded from these areas.

Most cucumber cultivars, however, are seeded and require pollination. Thousands of hives of honey bees are annually carried to cucumber fields just before bloom for this purpose. Cucumbers may also be pollinated by bumblebees and several other bee species. Most cucumbers that require pollination are self-incompatible, so pollen from a different plant is required to form seeds and fruit. Some self-compatible cultivars exist that are related to the ‘Lemon’ cultivar.  Symptoms of inadequate pollination include fruit abortion and misshapen fruit. Partially pollinated flowers may develop fruit that are green and develop normally near the stem end, but are pale yellow and withered at the blossom end.

Traditional cultivars produce male blossoms first, then female, in about equivalent numbers. Newer gynoecious hybrid cultivars produce almost all female blossoms. They may have a pollenizer cultivar interplanted, and the number of beehives per unit area is increased, but temperature changes induce male flowers even on these plants, which may be sufficient for pollination to occur.

Cucumbers grown to eat fresh are called slicing cucumbers. The main varieties of slicers mature on vines with large leaves that provide shading.[4] They are mainly eaten in the unripe green form, since the ripe yellow form normally becomes bitter and sour. Slicers grown commercially for the North American market are generally longer, smoother, more uniform in color, and have a much tougher skin. Slicers in other countries are smaller and have a thinner, more delicate skin. Smaller slicing cucumbers can also be pickled. 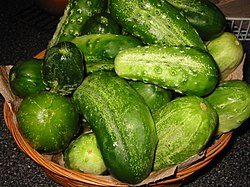 Cucumbers can be pickled for flavor and longer shelf-life. Although any cucumber can be pickled, commercial pickles are made from cucumbers specially bred for uniformity of length-to-diameter ratio and lack of voids in the flesh. Those cucumbers intended for pickling, called picklers, grow to about 7 to 10 cm (3 to 4 in) long and 2.5 cm (1 in) wide. Compared to slicers, picklers tend to be shorter, thicker, less regularly shaped, and have bumpy skin with tiny white or black-dotted spines. They are never waxed. Color can vary from creamy yellow to pale or dark green. Pickling cucumbers are sometimes sold fresh as “Kirby” or “Liberty” cucumbers. Pickled cucumbers are soaked in brine or a combination of vinegar and brine, although not vinegar alone, often along with various spices. Pickled cucumbers are called “pickles” in the US or “gherkins” or “wallies” in the UK, the latter name being more common in the north of England and London, where it refers to the large vinegar-pickled cucumbers commonly sold in fish and chip shops. 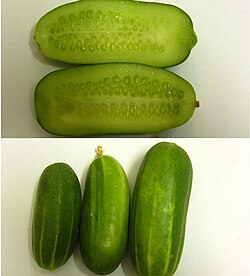 Burpless cucumbers are sweeter and have a thinner skin than other varieties of cucumber, and are reputed to be easy to digest and to have a pleasant taste. They can grow as long as 2 feet (0.61 m). They are nearly seedless, and have a delicate skin. Most commonly grown in greenhouses, these parthenocarpic cucumbers are often found in grocery markets, shrink-wrapped in plastic. They are sometimes marketed as seedless or burpless, because the seeds and skin of other varieties of cucumbers are said to give some people gas.

Several other cultivars are sold commercially: 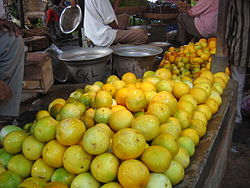 ‘Dosakai’ is a round, yellow, cucumber seen at a market in Guntur, India

In a 100 gram serving, raw cucumber (with peel) is 95% water, provides 16 calories and supplies low content of essential nutrients, as it is notable only for vitamin K at 16% of the Daily Value