The blackcurrant (Ribes nigrum) is a woody shrub in the family Grossulariaceae grown for its piquant berries. It is native to temperate parts of central and northern Europe and northern Asia where it prefers damp fertile soils and is widely cultivated both commercially and domestically. It is winter hardy but cold weather at flowering time during the spring reduces the size of the crop. The raw fruit is particularly rich in vitamin C and polyphenolphytochemicals. They are used to make jams, jellies and syrups and are grown commercially for the juice market. The fruit is also used in the preparation of alcoholic beverages and both fruit and foliage have uses in traditional medicine and the preparation of dyes. Breeding is being undertaken in Europe and New Zealand to produce fruit with better eating qualities and bushes with greater hardiness and disease resistance.

A medium-sized shrub, growing to 1.5 metres (4.9 ft) by 1.5 metres (4.9 ft). The leaves are alternate, simple, 3 to 5 cm (1.2 to 2.0 in) broad and long with five palmate lobes and a serrated margin. All parts of the plant are strongly aromatic. The flowers are produced in racemes known as “strigs” up to 8 cm (3 in) long containing ten to twenty flowers, each about 8 mm (0.3 in) in diameter. Each flower has a hairy calyx with yellow glands, the five lobes of which are longer than the inconspicuous petals. There are five stamens surrounding the stigma and style and two fused carpels.[2] The flowers open in succession from the base of the strig and are mostly insect pollinated, but some pollen is distributed by the wind. A pollen grain landing on a stigma will germinate and send a slender pollen tube down the style to the ovule. In warm weather this takes about 48 hours but in cold weather it may take a week, and by that time, the ovule may have passed the stage where it is receptive. If fewer than about 35 ovules are fertilised, the fruit may not be able to develop and will fall prematurely. Frost can damage both unopened and open flowers when the temperature falls below -1.9 °C (28.5 °F). The flowers at the base of the strig are more protected by the foliage and are less likely to be damaged.[3]

In midsummer the strigs of green fruit ripen to edible berries, very dark purple in colour, almost black, with glossy skins and persistent calyxes at the apex, each containing many seeds. An established bush can produce about 4.5 kilograms (10 pounds) of fruit each year.[4]

The most serious disease is reversion, caused by a virus transmitted by the blackcurrant gall mite. Another is white pine blister rust which alternates between two unrelated hosts, one in the genus Ribes (blackcurrant included) and the other a white pine.

Reversion is a serious disease transmitted by the blackcurrant gall mite Cecidophyopsis ribis. It causes a decline in yield and is quite widespread in Europe but is rarely encountered on other continents. Symptoms include a modification of leaf shape in summer and swollen buds (“big bud”) in winter, each housing thousands of microscopic mites.[12] As pest control has limited effectiveness, severely infected bushes should be destroyed. All new plants purchased should be certified as virus-free

White pine blister rust (Cronartium ribicola) needs two alternate hosts to complete its lifecycle. One host is plants in the genus Ribes. On the blackcurrant, it causes the leaves to become pale and later develop tiny orange pustules and sometimes a yellow filamentous coating on some leaves. The fruit crop is little affected but the leaves fall early and growth is slowed the following year. The other host is any of the white pines, in which it causes serious disease and mortality for the North American species that have not co-evolved with the rust

American gooseberry mildew and powdery mildew can infect the leaves and shoot tips, and botrytis may cause the fruit to rot in a wet season. Currant and gooseberry leaf spot (Drepanopeziza ribis) is another disease of blackcurrants, but it is not usually a serious problem as most cultivars now have some resistance.[7]

The blackcurrant leaf midge can cause browning, crimping and distortion of leaves at the tips of shoots but it is seldom a serious problem. The blackcurrant sawfly (Nematus ribesii) lays its eggs on the underside of the leaves and the voracious larvae work their way along the shoots, stripping off leaf after leaf. In a serious attack, the bush can be denuded of leaves. Larvae of the currant borer drill their way along the centres of shoots, which wilt and die back. Other insect pests include scale insects, aphids and earwigs.[10]

Blackcurrants can grow well on sandy or heavy loams, or forest soils, as long as their nutrient requirements are met. They prefer damp, fertile but not waterlogged ground and are intolerant of drought. Although the bushes are winter hardy, frosts during the flowering period may adversely affect the yield[6] and cold winds may restrict the number of flying insects visiting and pollinating the flowers. BC prefer slightly acidic soils and  a pH of about 6 is ideal for blackcurrants and the ground can be limed if the soil is too acidic. Planting is usually done in the autumn or winter to allow the plants to become established before growth starts in the spring,[7] but container-grown stock can be planted at any time of year.[4]

Two-year-old bushes are usually planted but strong one-year-old stock can also be used. Planting certified stock avoids the risk of introducing viruses. On a garden scale the plants can be set at intervals of 1.5 to 1.8 metres (5 to 6 ft) or they can be set in rows with planting intervals of 1.2 metres (4 ft) and row separations of 2.5 metres (8 ft) or more. In the UK, young bushes are generally planted deeper than their initial growing level to encourage new stems to grow from the base.[7]

The blackcurrant requires a number of essential nutrients to be present to enable it to thrive; nitrogen provides strong plant growth and stimulates the production of flower sprigs; phosphorus aids growth, the setting of fruit and crop yield; potassium promotes growth of individual shoots and increases the weight of individual fruits; magnesium is a constituent of chlorophyll and helps increase yields through interaction with potassium; calcium is required for cell division and enlargement and is particularly important for young plants and buds.[8]

An annual spring mulch of well rotted manure is ideal and poultry manure can also be used but needs prior composting with straw or other waste vegetable material. Spent mushroom compost can be used but care should be taken as it often contains lime and blackcurrants prefer slightly acidic soils. The blackcurrant is a gross feeder and benefits from additional nitrogen, and phosphatic and potash fertilisers should also be applied annually.[7] A balanced artificial fertilizer can be used and a 10-10-10 granular product can be spread around the bushes at the rate of .10 to .24 kg (0.2 to 0.5 lb) per plant.[9] Weed growth can be suppressed with an organic mulch such as sawdust, bark, mushroom compost or straw, heavy plastic topped with an organic mulch cover or landscape fabric.[7] 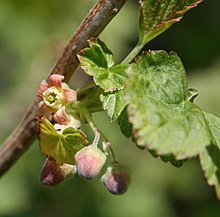 Fruit in blackcurrants is borne primarily on one-year-old shoots. Newly planted bushes should be pruned severely, cutting all shoots back to two buds above ground level. This gives the plant a chance to get properly established before needing to put its energy into producing fruit. The general rule when pruning is to remove all weak shoots and those growing out sideways which may get weighed down when fruiting. The remaining branches should be thinned so as to remove old unproductive wood and encourage new shoots. An established bush should not be allowed to become overcrowded and should have about one third of its main branches or stems removed each year.[7]

Per 100 g serving providing 63 calories, the raw fruit has high vitamin C content (218% of the Daily Value, DV) and moderate levels of iron and manganese (12% DV each). Other nutrients are present in negligible amounts (less than 10% DV, table).

Polyphenol phytochemicals present in the fruit, seeds and leaves, are being investigated for their potential biological activities.[46]

Blackcurrant seed oil is an ingredient in cosmetics preparations, often in combination with vitamin E. The leaves can be extracted to yield a yellow dye and the fruit is a source for a blue or violet dye.[53]